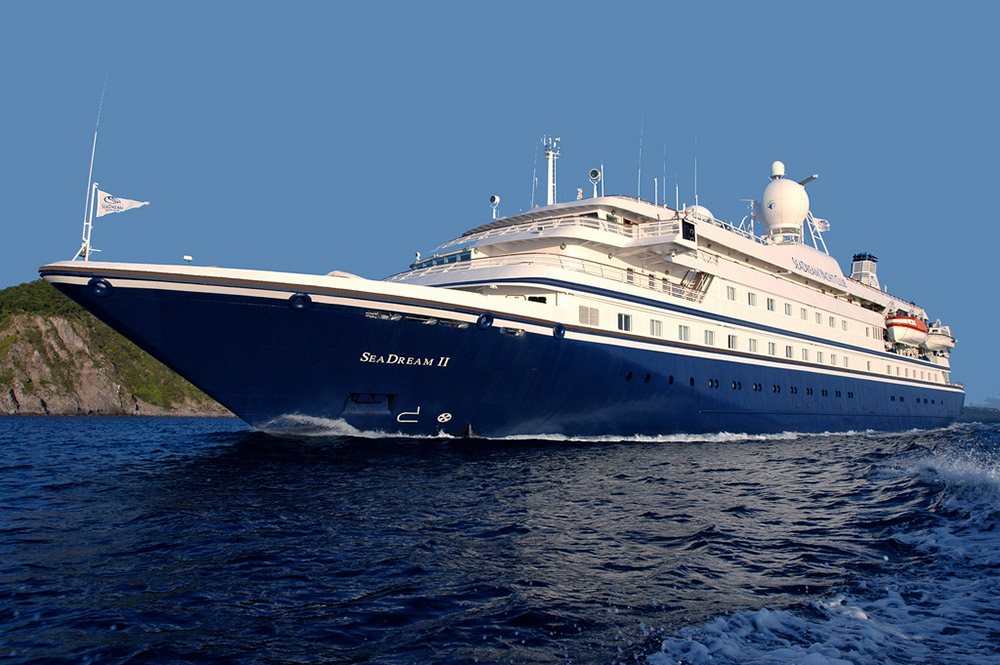 One of my favourite pastimes is reading travel books.I love to hear about the adventures of the writers as they travel through far off lands and seemingly make their way without incident to their final destination. They have fine-tuned the descriptive art of writing to the point where it’s not them that is the traveller, but you the reader.

This little blog is part homage to those writers and hopefully a fitting description of my exciting day-trip to visit SeaDream 2, one of super luxury mega-yachts belonging to the Sea Dream Yacht Club.

Today I am in Barcelona

At this moment I am in a Tapas bar right on the quayside and staring across the harbour at my floating hotel for the night, namely SeaDream 2.

To get to this point however was in the vein of the travel writers of yesteryear. (Sort of!) I chose to fly to Barcelona (Reus) the day before the yacht visit so as to get to the vessel on time and to enjoy a true evening of local Spanish lifestyle as best I could.

The airport at Reus is typically sleepy or at least it was when I arrived. I had to wait an hour for a bus to Tarragona. The reason for this was that I has booked a hotel in Coma-Ruga and had no idea that there was absolutely no connection between the airport and the hotel. In Tarragona I found my self facing a 20-minute walk from the bus station to the train station. One of the locals had told me it was only 5 bleedin’ minutes away!

The train ride was cheap and comfortable and within half an hour I was at my destination. I had decided to stay at the Hotel Gran Europe and I found it to be an excellent choice, right on the beach. Dinner was being served just as I arrived and the restaurant didn’t let me down when it came to the food offering. I wolfed down some excellent roast pork and washed it all down with a couple of San Miguel’s.

I’m on my way about 11 o’clock heading for Barcelona. Again a great train ride and an hour later I’m in the city. Barcelona has a fantastic underground network and it was quite easy to make my way to the harbour area. A short walk later and I’m in the Tapas Bar. SeaDream 2 is right in front of me.

SeaDream Yacht Club is a vastly superior experience to everyday cruising. It resides in the Six Star category and consistently wins awards for its service and hospitality.  Both SeaDream 1 and 2 host 112 guests in complete luxury and are attended to by a crew of 96. That has to be the ultimate ratio of crew service to passenger anywhere in the world.

Stepping on board is a real pleasure especially as the first thing you will see is a glass of fine champagne being offered to you. The pool deck was full of agents from different parts of Europe who had taken time out to visit this magnificent vessel. I sat down with two Norwegian agents and had a great discussion about the cruising industry bolstered and encouraged by a seemingly never ending supply of Chateau Lafitte, the complimentary house champagne. About four hours later I finally saw my suite (no cabins here!!) and quickly changed for dinner.

The restaurant atmosphere was charged with lots of shiny happy faces all eager to sample the delicious gourmet meal that was specially prepared for us. You might think that because we were agents that SeaDream would relax a bit and give us the “B” menu but no. Everything was strictly “A” list and we were treated to a range of dishes that Marco Pierre-White might struggle to put together. Well done SeaDream!

The evening blended into a series of lavish after-dinner drinks, or maybe we blended into the drinks, I’m not to sure at this point. All the bars on the yacht were well attended and the skills of the bar staff was put to the test creating elaborate cocktails. Each test was passed with flying colours. On the pool deck a big screen was erected and we had the option of watching Rod Stewart Live at the Albert Hall. Great fun at midnight whilst out in the open air and in great company. Finally though it was time to hit the hay.

All accommodations on board are suites. They are lavishly laid out and complimented by the expensive bathroom toiletries. In this case Bvlgari soaps and shampoos were in abundance. A lot of attention to detail in making the suite comfortable and tasteful is obvious in the choice of furniture, bedding and general surroundings.

Sadly time to leave SeaDream 2 but not before a fantastic breakfast to set me up for the day and to cure the threatening hangover.  I have one last walk around the yacht and eventually make my way down the gangplank.

Barcelona is now before me but I’m not sure I can afford the time to walk around and do the touristy thing. It is almost 35c degrees and I don’t have the energy to do a walkabout. So I make my way via the metro to Barcelona Sants train station to connect down to Reus.

As before, the train ride is fast and comfortable and too soon we pull into Reus. It is a Saturday and there seems to be almost nobody about! Where have they all gone? Down the bloody beach I’ll bet!! I in the meantime get the bus to the airport.  Nothing has changed at the sleepy airport and gradually all the passengers for my Ryanair flight to Luton turn up ready to check in. I’d like to do another story or comment about the behaviour of people at airports because it always strikes me as funny the way people start queuing at a desk in a way that suggest that by doing so they will get home quicker! Odd that! Needless to say that’s exactly what happened at Reus and despite all their efforts we all got back to Luton at the same time.

The exciting trip to visit SeaDream 2 was over. All that lay ahead was a dreary drive down the M1, but the memories of the last 2 days more than made up for that.

Here’s to the next mini-trip abroad. 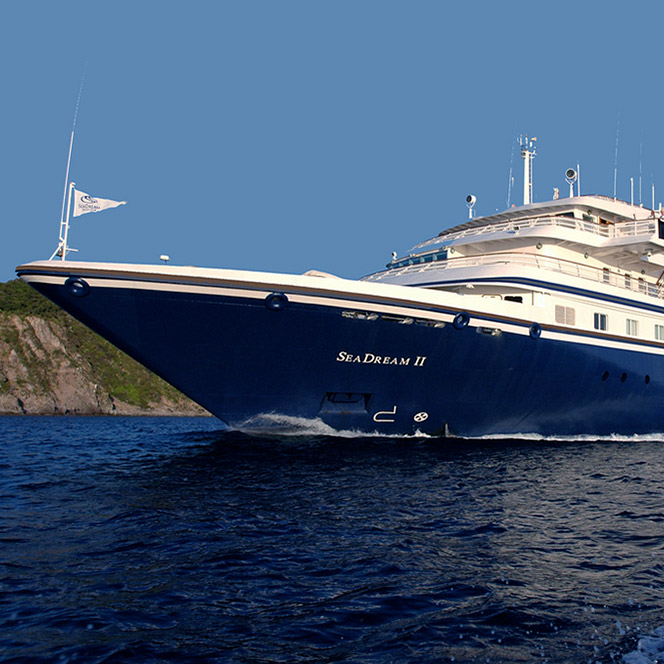 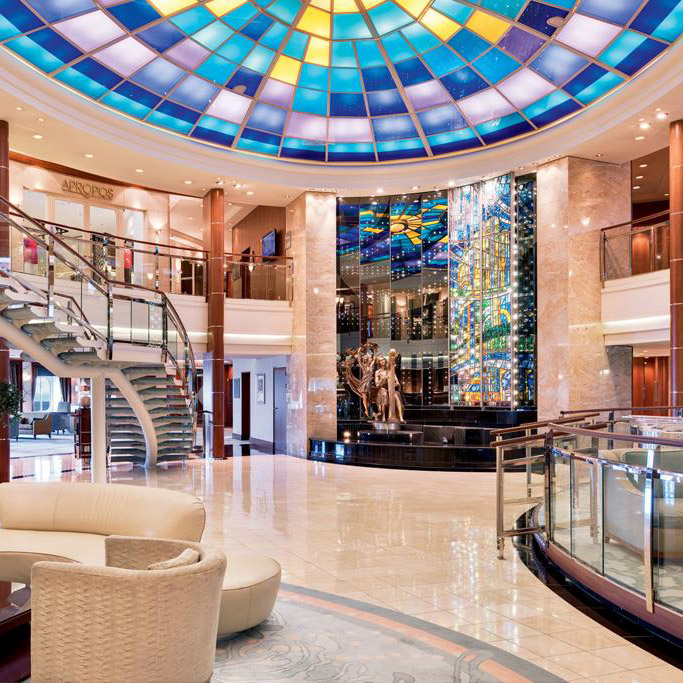 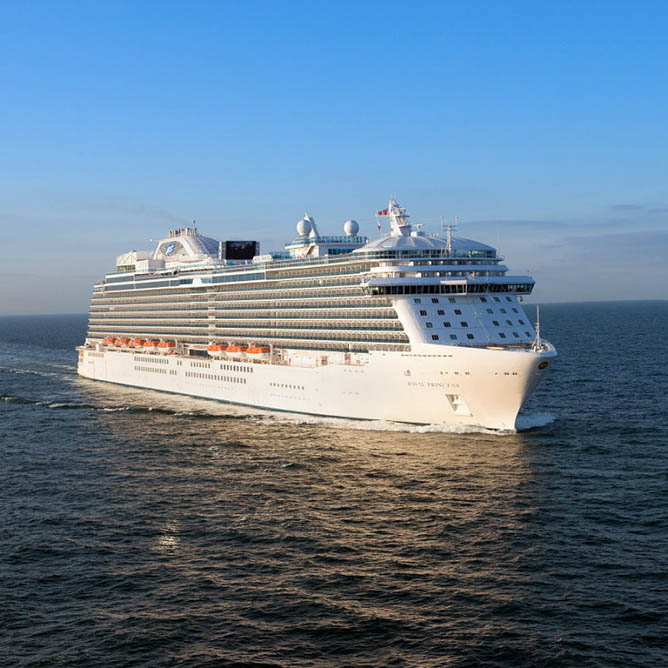